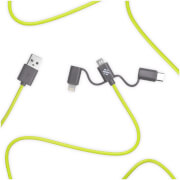 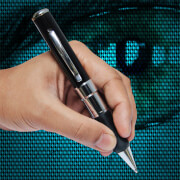 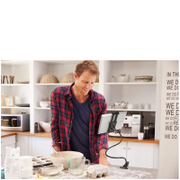 This gadget can put virtually any television into standby mode and is tiny enough to hide in the palm of your hand, so no one knows it's you that's terminated that TV! There's nothing worse than going out for a quiet drink or intimate meal and having a TV screen ruining the experience for you. Now there's a solution! The Telly Terminate!

Small enough to attach to your keys and keep in your pocket so it's always ready to turn off televisions wherever you are. There's no way to tell it's been used, so if you're discreet enough, it'll just look like the TV has gone into standby mode on its own. Handily, the Telly Terminate also features an LED torch, which is useful on its own, but also means that if you do get asked about the Telly Terminate, you can just say that it's a tiny light that you carry with you.

Of course, being able to put TV screens into standby mode could be used for various pranks, wherever there are TV displays, but that's up to you and we'd never suggest anything like that. No. Of course not!

I bought the Telly Terminator as a little birthday present for my boyfriend who is always falling asleep with his TV on! I was really surprised to find that as well as turning off your TV, it also turns it on. It also had a little light, definitely a handy little gadget!

My Telly Terminator hasn't worked on any TV I tried, not even in front of 12 TVs on display.

what a let down

This Telly Terminator didn't work at all. This is very disappointing and I would definitely not recommend it.

The idea behind the Telly Terminator is great. Two came with dead batteries and the other one drains the battery within half a day without usage.

Not fit for purpose.

Yeah I said it, and I mean it. This wasn't a serious buy on my part, I just figured it would be a useful gadget to have on my person, so I bought it together with my Christmas shopping. But on arrival, I instantly saw it was a waste of time. It's been very poorly made, the key-chain supplied broke at the slightest jolt. After carefully reading the directions and instructions, simple as they were, I attempted to use both functions, the LED light and the remote standby. Neither worked. I changed the batteries, still nothing. I tried percussive maintenance, still nothing. There's a reason this is so cheap. I was actually kind of surprised, because usually IWOOT's little gadgets and gizmos are always quite rewarding.

The Telly Terminator works on all of the TVs in my house apart from my bedroom one, but it really does work and I would recommend it to anyone. By the way, the little torch on it is awesome.

The Telly Terminator is a good little gadget and is very fun to play with. However, it doesn't turn on/off a lot of the TVs that I have tried, but it's very fun when it does.

The Telly Terminator was a brilliant present! I bought it for a friend so she could wind up the local barman, and it worked!

The Telly Terminator looks good, but it feels so cheap and light upon picking it up. I tried it out on my home TV and after standing there with it pointed at the screen and pressing the button repeatedly it eventually registered and turned the TV off. This is supposed to be a surreptitious device. If I wanted to be obvious I'd turn the TV off at the wall.

Had lots of fun with this, although it sometimes takes a while to terminate some tellys! Brilliant pressie for kids of all ages!