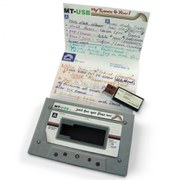 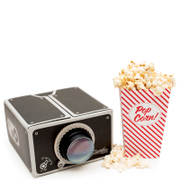 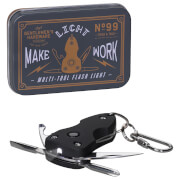 Back in the Cretaceous Period (or was it the 70's), when calculators were the size of small cars and an auto pop-up toaster was considered hi-tech, some geek sandwiched two circuit-boards together, chucked in some random wiring, and gave birth to a musical (sic) instrument that was to become an icon. After nearly 40 years in the closet, the Stylophone pocket synthesiser made popular by the likes of Rolf Harris and David Bowie (he used it in timeless classic Space Oddity) is back. You tap the electronic keys with the integral stylus to make funky noises - now with additional Classic, Synth and Bass sounds, - and maybe you can produce some musical hits using this retro kit as the likes of Kraftwerk, Erasure, Orbital, Marilyn Manson, They Might Be Giants, and White Stripes have done in the past. You can play solo, or plug in your iPod/MP3 player and play along to your favourite tunes, and even add some vibrato enhancement to really annoy anyone foolish enough to be listening to you. It may have been invented in 1967, but 40 years on this re-invention is bound to be another hit.

Brought it for my granddaughter, as it is different to nintendo and mobile devices, she liked the novelty.

Recently I attended with my son a concert in the picturesque inn of the "Moulin de la Pipe" in Ardeche (south of France). The spot is famous internationaly among rock climbers, but we were there for another kind of "rock". A group that are called "the Wackies" who only toy instruments! Among those devices, a Stylophone ruled the way with its hypnotic tones. Both my son and I made our mind up and realized that we wanted want one of those! So we went on IWOOT and purchased one.

The Stylophone is a childhood dream and an opportunity for some new sounds effects in the band!

The Stylophone took me back to being 10 years old when my brother got one of these. Plus there are a few enhancements now.

This Stylophone makes your childhood dreams come true. That's three down and four to go!

I bought this Stylophone for a musical friends 18th birthday after nearly getting it for him last christmas. I took it out of the packaging to test it before giving it to him and found myself on it for a good hour before I wanted to put it back again. He thinks it's brilliant and he's also the type of person to use it in recordings. I have no complaints at all with this product, it's a great little gadget. Well done IWOOT!

Really pleased with the Stylophone. I ordered it as a joke birthday present for my brother, as I remember he had one when we were kids. He absolutely loved it and the delivery was really fast too.

The Stylophone was bought as a gift for my husband and it was gratefully received. A unique gift that brings back childhood memories for us both, with the added bonus of updated MP3 integration. Hours of fun for the family!

The Stylophone is just what I wanted as a fun present for my grandson. Reminds me of my younger days too when this was all the rage.