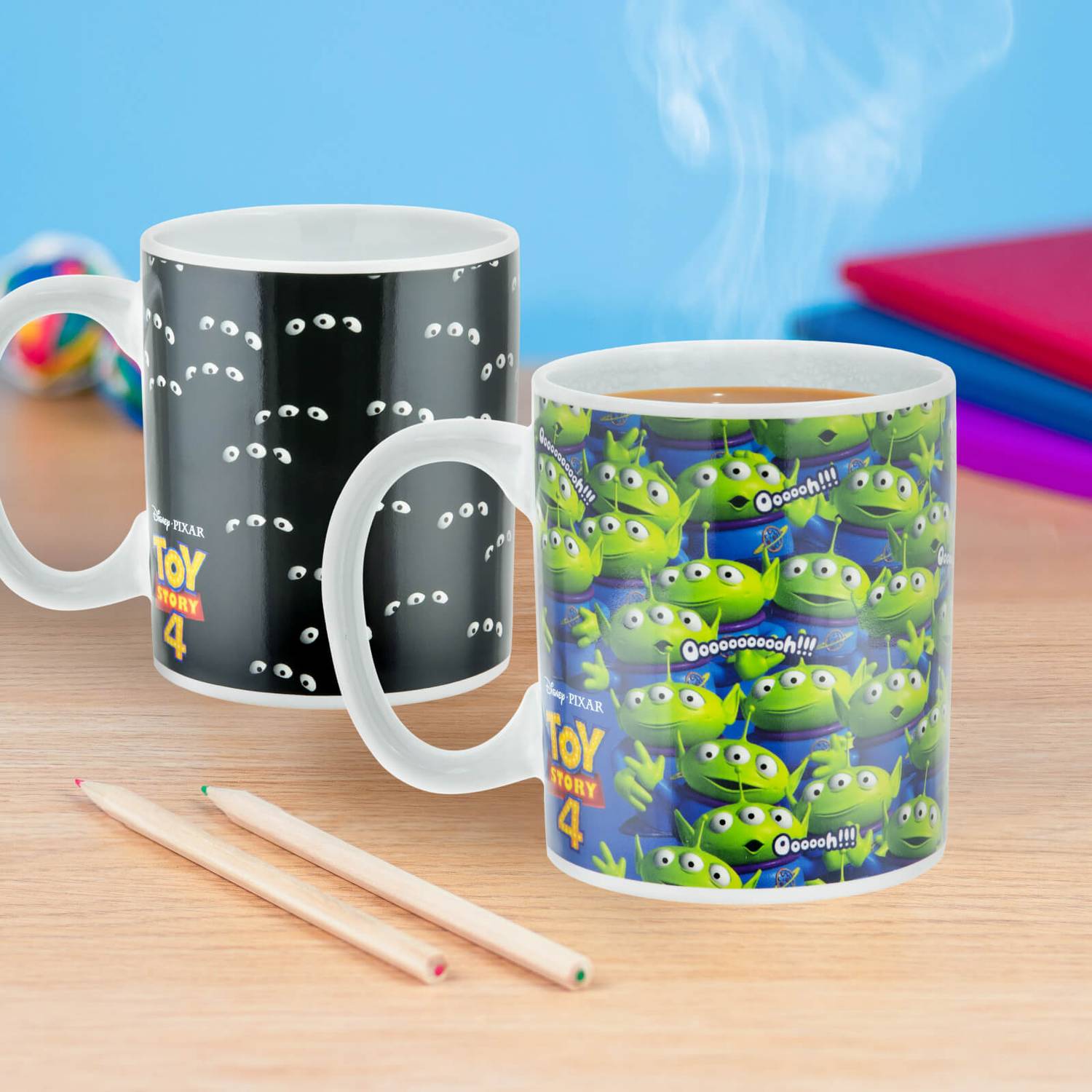 Enjoy a tasty hot beverage accompanied by a lot of extra terrestrial pals, with this Toy Story Alien Heat Change Mug. Just be aware, you’ll never be able to shake them off!

A wonderful piece of Toy Story memorabilia, when cold this mug features lots of eyes staring at you out of the dark. However, once you pour in your hot drink, all of the adorable aliens appear. This fun, standard sized mug is an ideal gift for Toy Story fans and works nicely as both a stocking filler or office Secret Santa present.

First released in 1995 by Disney Pixar, Toy Story broke new ground in cinema animation, and made lead characters Woody and Buzz household names. With two sequels proving to be equally popular in 1999 and 2010 respectively, the much anticipated 2019 release of Toy Story 4 highlights the ever growing fanbase for the much-loved franchise even 24 years after the original. Toy Story has won many plaudits and awards, and will go down in history as one of the most loved animated films of all time.

Must have for toy story lovers!!

Absolutely love the product, looks great with or without a hot drink!

Really happy with this mug. My son loves it and it looks great and it works brilliant too! Lots of cups of tea being made in our house! 👍🏻

Bring the fun to your morning coffee!

These mugs make me smile! I bought seven of them whilst they were on offer, as presents for a couple of my youngest children and my grandchildren, as the mugs I have previously bought from you over the years, have all been good quality and have lasted well. So far the only people benefiting from them are my husband and I!! We use them for preference for our morning coffees. They put a huge smile on my face every time I fill them up. I know its daft but those little green aliens are make a cheerful start to every day! I've also found that its surprisingly handy knowing at a glance that those last few mouthfuls are cooling down from the colour change and the glow of rows of little eyeballs!! If you want a lift each morning you can't do better than these mugs. I maybe back for more!! Thank you x

Fun whilst dunking your Bun!

Quality product, comes boxed ideal for giving as a small gift, stocking filler or Secret Santa. Kids love them, Adults too! fun, colourful, chic and on trend. What's not to like!