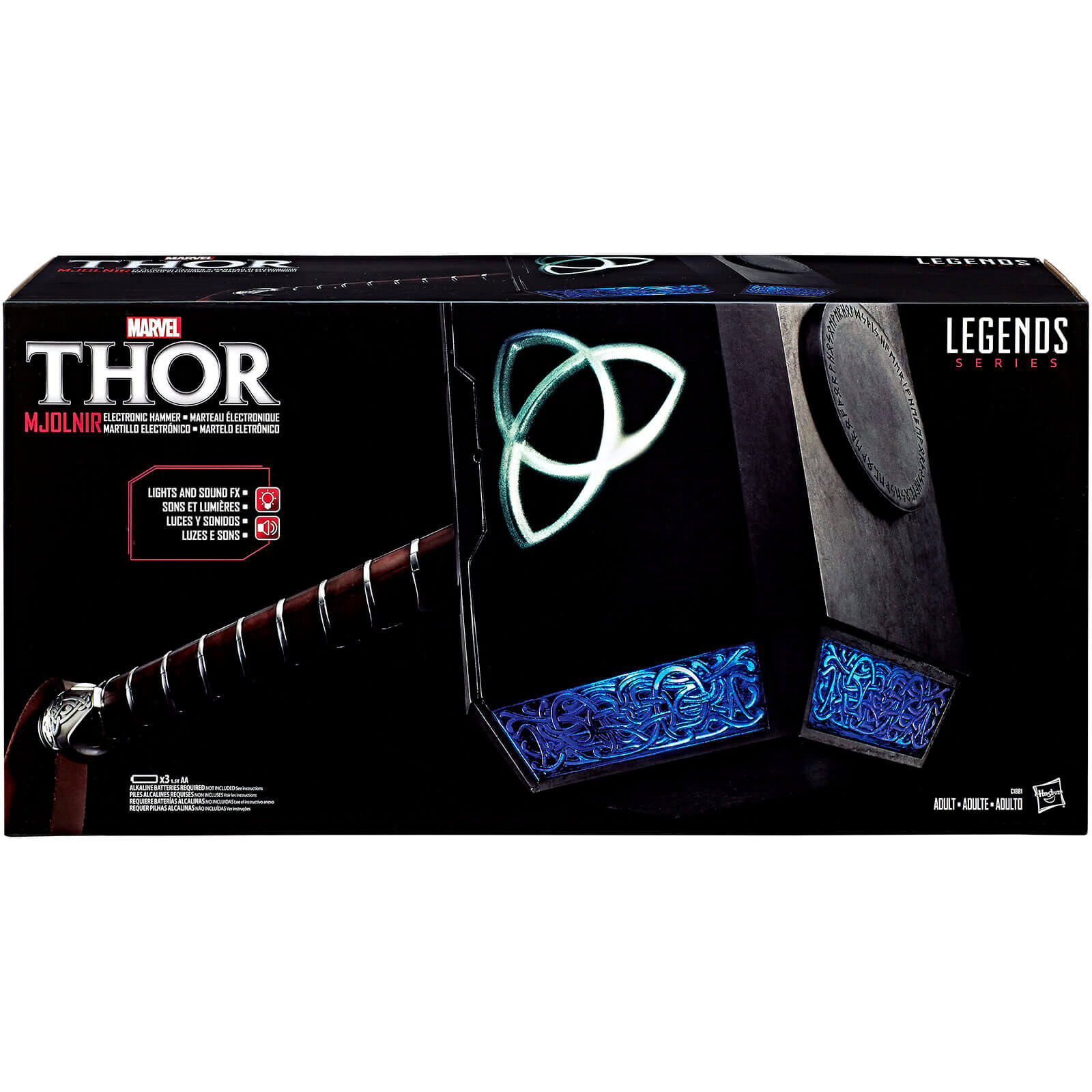 Feel as worthy as the God of Thunder and summon the power of Mjolnir! Marvel fans will love this Thor Mjolnir electronic hammer, as they recreate epic battle scenes and imagine they are journeying to Asgard and embarking on an intergalactic adventure with Thor himself.

Mjolnir, hammer of Thor, first appeared in Marvel Comics ‘Journey Into Mystery #83’ in 1962. Mjolnir is a powerful, enchanted war-hammer forged by the Dwarves on Nidavelir. It is forged from the metal found deep in the heart of a dying star. It's power has no equal as a weapon to destroy, or as a tool to build and Odin, King of Asgard, entrusted this ultimate weapon to his son Thor.

The impressive Hammer of Thor, Mjolnir is actually based on original and true Norse mythology. In legend, Mjolnir is one of the most fearsome and powerful weapons in existence and does in fact belong to Thor. It is described as being capable of leveling mountains, amongst other impressive abilities.

In the MCU Thor Odinson is the Asgardian God of Thunder, the former king of Asgard and New Asgard, and a founding member of the Avengers. Fans have loved watching every step of his journey, from the first Thor film in 2011, to Thor’s rundown with the Warlord Thanos in Avengers Endgame (2019). The character is a firm fan-favourite and this piece of official Marvel Merchandise will help you feel closer to the action than ever.

Only those who are deemed worthy are able to lift the hammer and possess the powers of Thor. Fans can test their worthiness and lift the hammer to summon lightning, thunder and immense power.

This premium Mjolnir Electronic Hammer from the Marvel Legends Series has incredible attention to detail, and is extremely authentic. Inspired by the classic Thor look seen in the Marvel films and built at full scale size, this Mjolnir Hammer of Thor Prop Replica features intricate detailing on the hammer’s pommel, straps, and hammerhead.

This highly detailed and 1:1 full-scale Thor Mjolnir Toy would make the perfect gift for any fan of the strongest Avenger. The 19.75-inch Mjolnir Electronic Hammer includes premium lights, movie-inspired  sound effects, and a voice-activated light feature that reveals the legendary symbol of Odin!

This impressive piece of Marvel Avengers Merchandise comes with a display stand, which allows you to display your Mjolnir Electronic Hammer alongside your Marvel collection.